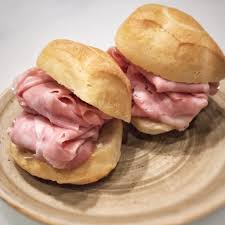 Believe it or not, the Bologna sandwich, also known as “baloney sandwich” and very famous in the US and Canada, has little or nothing in common with the foodie capital of Italy. In fact, what we normally fill our fresh out-of-the-oven bread with, is far away from the American baloney. It is by far the most typical and iconic cold cut of our homeland: Mortedella!

But where does its peculiar name derive from? Maybe from mortar used to make it, or mortarum a type of sausage seasoned with myrtle berries, or murtarum meaning fine minced meat. The origins of this delicious sausage known all over the world as the Bologna or Baloney are still uncertain.

Nevertheless, in the Archeological Museum of the city there is a stele dating back to the Roman Empire showing 7 little big grazings in a pasture and a mortar and pestle. This would be the evidence of the presence of a ​mortadella producer and the use of cooked sausages. Some historians also think that pig breading was introduced by the Celts. Others believe that the sausage was invented by an order of friars. However the most feasible theory is the one which attributes the first production to the guild of the Salt Men.

Said that, mortadella was very popular in the Renaissance when it was considered a deluxe food product used by the greatest chefs and served on the tables of the noble families of the city. As early as in the XVII century the Cardinal Girolamo Farnese published a notice which prescribed that Bologna sausage must be prepared only with selected pork meat in the respect of the tradition of the Salaroli – Salt Men guild. In the XVIII century mortadella was even three times more expensive than Prosciutto!

Nowadays, mortadella is one the Italian favorite sausages, a symbol of Bologna. This heat-cured meat is made with selected pork, finely ground with the addition of diced bacon and traditionally packed in a cow’s gut. Since the 19th century mortadella together with tortellini pasta are Bologna’s most exported food products.

Are you visiting Bologna in the next few days? Don’t miss out to try our amazing Bologna Food Walking Tour where you can taste the most delicious Mortadella like a local with tigelle and crescente. In Bologna mortadella is not fried, but freshly sliced and served between two slices of bread or tigelle and crescente, two types of traditional breads. That’s the authentic Bologna sandwich! Better if accompanied by a glass of Pignoletto or Lambrusco wine!

If you are planning to visit Bologna in late September, you may also visit Zola Predosa, considered the capital city of mortadella, which will host the 14th edition of the Mortadella Please Festival from September 30 to October 2 2022. Come to Bologna to celebrate the “Pink Queen” of the Bologna tables!