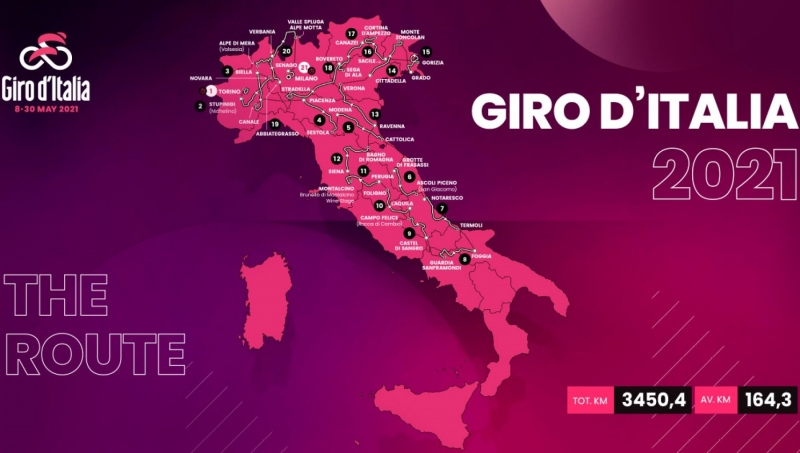 The Giro d’Italia first edition was held on 13 May 1909 and it was curated by the sport magazine Gazzetta dello Sport. At that time cycling was much more famous that soccer in Italy to be considered the national sport! Since then the tour of Italy took place every year with the exception of the time of the two world wars.

The Giro d’Italia is a men’s cycling race in stages which although organized in Italy, it is attended by sportsmen of all nationalities and considered one of the greatest European races. The route of the race varies from year to year and crosses a large part of the Italian peninsula.

The undisputed symbol of the Giro d’Italia is the Maglia Rosa – the pink T-shirt worn by the leader of the general classification (which can change during the race). This pink T-shirt was introduced in 1931 by the journalist Armando Cougnet. The colour was chosen to pay homage to the pages of the Gazzetta dello Sport, which since 1899 is printed on pink paper. The Maglia Rosa is the dream of every child who starts riding a bicycle. It’s the dream of every rider taking to the start of the Giro d’Italia every year. For this edition the 4 sweaters have been made in a recycled yarn fabric Native by Sitip, the Italian excellence in sustainable technical textiles.

The logo of the Giro was restyled in 2017 for the 100th race, combining the symbols of the event which are the Trofeo senza Fine – the emblem of final victory and the symbol of the infinity into a rider in the pink jersey. Amore Infinito – Infinite Love, symbolizes the endless love for cycling and for the Giro d’Italia.

The 2021 edition which is the 104th one will take place from May 8 to 30 from Turin to Milan, 23 teams, 3410 kilometres, 21 stops. It will be an amazing race with many themes and ideas that are the corollary of the itinerary. The Unification of Italy, Dante Alighieri, the 90th birthday of the Maglia Rosa, the great mountains, landscapes, villages and the Italian cities, the Winter Olympics and the memory of great men and champions who gave prestige to cycling and the Giro d’Italia.